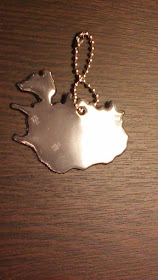 Eight-year-old children ride their bikes around downtown Reykjavik without the escort of an adult. I've seen them with my own eyes. I wrote earlier this week about meeting actual Icelandic fairies, but in some ways, seeing this is even more astonishing. I witnessed a group of three boys who all looked to be younger than 12, looking for trouble, toss a pebble through the doorway of a shop, then run away, hopping a locked gate to escape. I ran into them less than a block later, giggling into one another's red faces at having gotten away with their unsupervised bit of mischief. If the fairies had been a visitation from mythology, these children had come to me from the past.

Not long ago, I wrote that I sometimes feel like the Lorax, charged with some of the last seeds left over from the Golden Age of childhood play, but I've found that there is at least one place where it still flourishes "in the wild."


"Never doubt that a small group of thoughtful, committed citizens can change the world; indeed, it's the only thing that ever has." ~Margaret Mead

When I was in third grade back in the 1960's, not so long ago, I attended a school in which all the students were white. The following year, the courts found that segregated schools were inherently discriminatory and ordered them desegregated. One of my neighbors warned me before I stepped onto the bus that was to take me to Atlas Road Elementary School that "people defecate in the ditches on the side of the road over there." In those days the n-word was used freely and it was just taken for granted that black children were inferior to white in every way. I remember when Martin Luther King, Jr. was assassinated.

Today, I live in a country that has elected a black President, not once but twice. I'm not suggesting that racism is gone by any means, but if you had suggested to anyone from my childhood that we would elect a black man to the nation's highest office, they would have told you it was impossible.

We now all have front row seats for observing another impossibility becoming reality. Even ten years ago, had you suggested that same sex marriage would be the law of the land, most of us would have said it was impossible, yet here we are now, only a few years later, standing on the threshold of that reality.

I'm not interested in hearing about something being impossible.

There are laws and attitudes and fears to overcome, there have been several generations of parents who have taken it on faith that their children cannot, for whatever reason, live a childhood of being outdoors, unsupervised, left to their own devices, with lots of time, in the company of other children. We've replaced it with screens and "activities," and overflowing toy boxes, because we know they need something, yet when we tell ourselves the truth we know in our hearts that it's a poor replacement for actual freedom.

I've just spent a week here in Iceland with a small group of thoughtful, committed citizens who know the world needs to change, each with a pocket full of Truffula seeds. I'm not interested in hearing about the impossible.